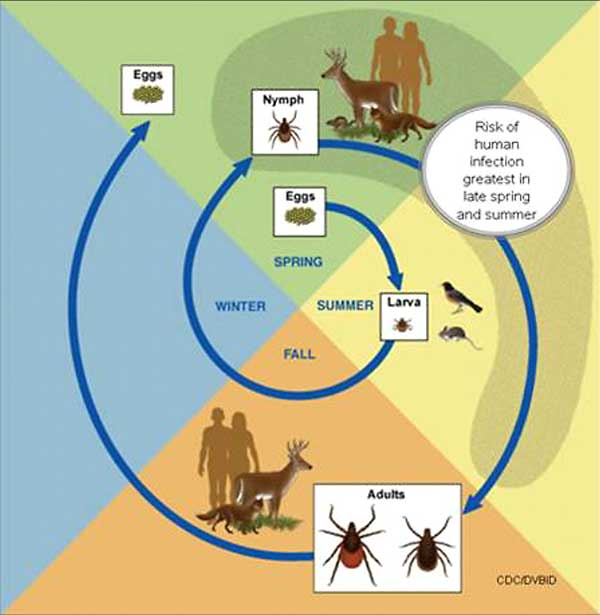 Although ticks are commonly thought of as insects, they are actually arachnids like scorpions, spiders, and mites. All members of this group have four pairs of legs as adults and have no antennae unlike adult insects which have three pairs of legs and one pair of antennae. Ticks are among the most efficient carriers of disease because they attach firmly when sucking blood, feed slowly and may go unnoticed for a considerable amount of time while feeding. Ticks take several days to complete feeding.

Ticks have four life stages: egg, six-legged larva, eight-legged nymph and adult. After the egg hatches, the tiny larva (sometimes called a "seed tick") feeds on an appropriate host. The larva then develops (molts) into the larger nymph. The nymph feeds on a host and then molts into an even larger adult. Both male and female adults find and feed on a host and then the females lay eggs sometime after feeding.

Ticks wait for host animals from the tips of grasses and shrubs (not trees). When brushed by a moving animal or person, they quickly let go of the vegetation and climb onto the host. Ticks can only crawl; they cannot fly or jump. Ticks found on the scalp have usually crawled there from lower parts of the body. Some species of ticks will crawl several feet toward a host. Though ticks can be active all year-round, the risk of human infection is highest in the late spring and summer months.

While at least 15 species of ticks occur in Illinois, only a few of these ticks are likely to be encountered by people: American dog tick, lone star tick, blacklegged (deer) tick and brown dog tick.

Where found: Widely distributed east of the Rocky Mountains. Also occurs in limited areas on the Pacific Coast.
Transmits: Tularemia and Rocky Mountain spotted fever.
Comments: The highest risk of being bitten occurs during spring and summer. Dog ticks are sometimes called wood ticks. Adult females are most likely to bite humans.

Where found: Widely distributed in the southeastern and eastern United States.
Transmits: Ehrlichia chaffeensis and Ehrlichia ewingii (which cause human ehrlichiosis), Heartland virus, tularemia and STARI.
Comments: A very aggressive tick that bites humans. The adult female is distinguished by a white dot or "lone star" on her back. Lone star tick saliva can be irritating; redness and discomfort at a bite site does not necessarily indicate an infection. The nymph and adult females most frequently bite humans and transmit disease.

Where found: Widely distributed across the eastern United States.
Transmits: Borrelia burgdorferi and B. mayonii (which cause Lyme disease), Anaplasma phagocytophilum (anaplasmosis), B. miyamotoi disease (a form of relapsing fever), Ehrlichia muris eauclairensis (ehrlichiosis), Babesia microti (babesiosis), and Powassan virus (Powassan virus disease).
Comments: The greatest risk of being bitten exists in the spring, summer, and fall. However, adults may be out searching for a host any time winter temperatures are above freezing. Stages most likely to bite humans are nymphs and adult females.

Where found: Worldwide.
Transmits: Rocky Mountain spotted fever (in the southwestern U.S. and along the U.S.-Mexico border).
Comments: Dogs are the primary host for the brown dog tick in each of its life stages, but the tick may also bite humans or other mammals.

Where found: Gulf Coast ticks are located in southeastern and mid-Atlantic states, southern Arizona, and have recently been discovered in Illinois.
Transmits: Gulf Coast ticks can transmit Rickettsia parkeri rickettsiosis, a form of spotted fever.
Comments: Larvae and nymphs feed on birds and small rodents, while adult ticks feed on deer and other wildlife. Adult ticks have been associated with transmission of R. parkeri to humans. 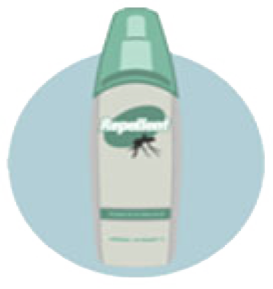 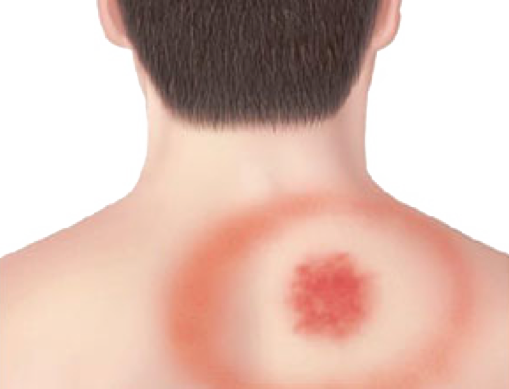